Senior of the Month: Krystal Ramnarine 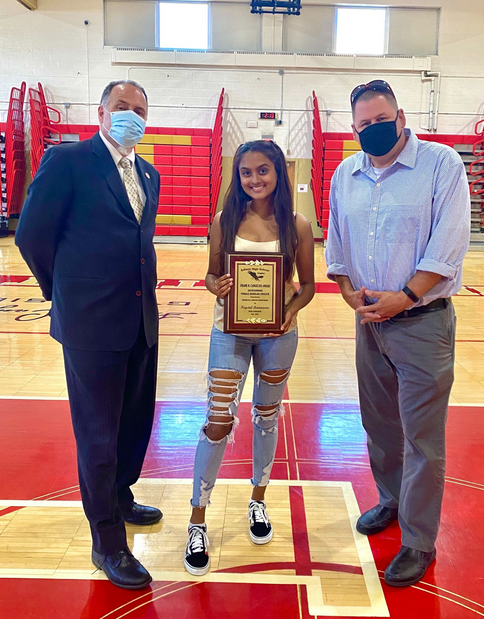 Mr. Ross, Krystal, and Mr. Sandaal posing for a picture with the scholar athlete plaque after the virtual winter varsity awards night.

Which EHS student was a dancer on Broadway, in ABC’s Disney World Christmas Parade, and during halftime for the Harlem Globetrotters? March Senior of the Month Krystal Ramnarine has danced not only in these performances, but throughout her life: whether that means physically dancing, or simply living creatively and passionately. These three performances are only the beginning of Ramnarine’s accomplishments and experiences; her myriad of academic, athletic and creative endeavors reveal many more.

Alongside her commitment to the volleyball team, Ramnarine has also contributed to EHS clubs such as Student Council. An avid STUCO member since freshman year, she has been the class secretary in her sophomore year as well as class vice president in her junior year. For the 2020-21 school year, she was our general STUCO President! Ramnarine’s leadership in the student council shaped her; She describes the experience as a “defining moment.” It helped her gain a “newfound sense of self-confidence,” which she also developed through dance.

Ramnarine holds dance close to her heart: it is her biggest passion. She brought her love for dance to the EHS Dance Ensemble as the current President. Additionally, her choreography was “showcased at the 2020 Teen Arts Festival at Middlesex County College as well as the 2021 Edison High School Dance Collective.”

A dancer for the past 13 years, Ramnarine has grown up in “the hustle of the dance world.” She recalls sliding her laptop “between ballet slippers and tap shoes to tackle the honors workload during breaks at the studio,” which has become the norm for her. “I wouldn’t trade those experiences for anything because they’ve shaped me into the multifaceted person I am today,” she says. This exposure has taught her “valuable skills such as confidence and multitasking,” which she intends to utilize in her future career goals.

Ramnarine will continue her academic career at Cornell University this fall, on a pre-med track. Even as she moves forward into her future, she looks back on her memories at Edison High School with pride. Krystal describes EHS as “a place where anyone can thrive. The numerous clubs, sports, and academic programs offered will be the source of some of your favorite memories over the next four years.”

Finally, as her time at EHS comes to a close, Ramnarine also leaves advice for the incoming freshmen. “Get involved,” she says. “Find what makes you happy. Don’t be afraid to be who you truly want to be.”